A number of enhancements have been made to the OBC script shooting mode to enable the shooting of OBN H and I patterns.

A new robust and consistent method is now used to determine active source stations for a given patch. Previously some station layouts lead to incorrect source lines being active for some patches. The parameters Offset Shots from Center Point (Number of Lines, Number of Stations) are now honored as one would expect. In some cases, shot events were created for nonexistent shots and for empty patches.

A new method for computing 3D ray model CMP – CRP displacement analysis has been added. The legacy method failed to generate results when a ray could not be traced, which frequently occured in steeply dipping areas (where you want the estimate most).

The X and Y coordinates of the ensemble CDP position (CDP_X and CDP_Y) have been moved to their standard byte locations of 181-184 and 185-188, respectively.

Inline and xline numbers (INLINE_NO and XLINE_NO) have been moved to their standard byte locations of 189-192 and 193-196, respectively.

Measured depth of downhole VSP sources and receivers (DEPTH_SHOT and DEPTH_REC) are now computed and written to byte locations 49-52 and 225-228, respectively, when applicable.

Many cases of missing trace headers are now written.

All synthetic generation methods now perform no processing by default. This is the most popular choice, as processing is typically performed afterwards with a separate processing system.

Omni Help has been updated with a full listing of all trace headers.

The ‘Save to KML’ operation for obstacles, detours, streamer obstacles, survey boundary has been improved:

These objects are now consistently output as polygons regardless of their type. Previously there were situations where objects were output as KML LineStrings, which caused issues during subsequent import.

Polygon fill setting is transferred from the Appearance setting. When set to Hollow, the polygon is not filled. Any other selection (Solid, Horizontal, etc.) causes the polygon to be filled.

We have partnered with Norsar to add exports in the Norsar format for survey script and streamer objects. You can export to new or existing Norsar projects.

We have added DIO exports for survey and streamer objects. DIO is a proprietary seismic data format used by the Schlumberger WesternGeco Omega processing system.

Aerial imagery acquired from Bing Maps has been dramatically improved. First, the maximum possible resolution is now downloaded from Microsoft for a given tile. Secondly, a new multi-tile scheme has been added to further enhance image resolution. The number of tiles to download is set in the Settings > Options > Bing Maps tab. Options include 1, 4, 9, 16, and 25 tiles per image acquired.

Convenient view panning has been added. To pan the current view: Hold down the middle mouse button, and then drag the mouse. View panning is enabled for most tabs.

Added ‘Load Scale, Except Title…’ and ‘Paste Scale, Except Title…’ operations to the color scale context (right-click) menu. These operations function the same as ‘Load Scale’ and ‘Paste Scale’ operations, with the exception that the title of the color scale is left unchanged. This is useful when you wish to modify a color scale but keep the current title, e.g., when displaying station attributes. Note that the title of a given color scale is the same as the name of the attribute that it is displaying, and so a modification in either one automatically updates the other.

The color scale context (right-click) menu has been reorganized to better group common functionality together.

Faster survey load and save times

Survey load and save times are now approximately 5x and 2x faster, respectively. Surveys with large scripts benefit the most.

More error checking has been added to low-level file reads and seeks. OMNI now attempts to skip over detected issues and continue loading whenever possible. Corrupt files can occur when a user kills OMNI (or OMNI crashes) while writing a file.

Robust estimates of the inline and xline angles

Robust estimates are now utilized to determine a line’s average inline and xline angles. These estimates are used extensively throughout the layout portion of the application, and are extremely important for handling zig-zag type station layouts.

A method has been added to reproject data streamers into another projection system. Right click data streamer to re-project > Edit > Re-project MyStreamer.ost.

Report tags PROJ_DATUM_WGS84 and DATE_SHORT have been added for survey and streamer reports. PROJ_DATUM_WGS84 provides a list of datum transformation parameters to WGS84 (dx,dy,dz,rx,ry,rz,ds) as used for the survey. DATE_SHORT provides the current date in short format (YYYY-MM-DD) with no commas. The all-encompassing projection system report tag PROJECTION includes these modifications, plus some cleanup. These changes apply to summary and custom reports.

New planar units have been added.

Dialogs for selecting SEGY files now support ‘sgy’ and ‘segy’ extensions and permit any file type to be selected. The ‘sgy’ extension remains the primary extension for SEGY files.

The apply obstacles operation now leaves stations unaltered when obstacles do not affect the given station type (shots or receivers). For example, if obstacles are set to affect only shots, then selected receivers will be left unaltered. Previously this situation would result in receivers being excluded.

Progress bars, panes, and windows now display immediately showing zero percent complete. Previously they would display only upon completing one percent of the progress. For large computations, the lack of progress update was frustrating and was frequently interpreted as a hung application.

Illumination analysis for 3D ray models now discards rays with a reflection angle that is >= 90 degrees.

The Clear File operation has been added to the right-click context menu of the ASCII tab.

The maximum number of characters that can be displayed in the ASCII tab is now 2X the previous limit.

The installers have been updated to streamline the installation process.

Users must now confirm SEGY processing before it is performed. Processing modifies SEGY files in place. The new confirmation message informs users (so that they do not overwrite an original) and recommended processing a copy.

Client and area names (for surveys and streamers) are now set to “N/A” by default upon object creation. 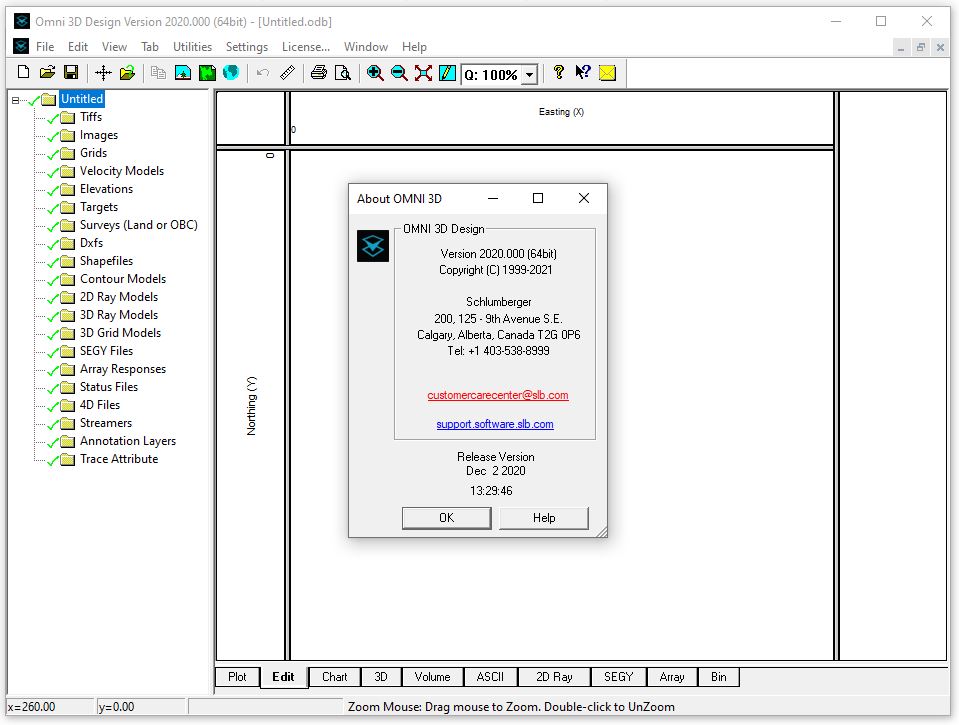